The No. 6-seeded New York Islanders and No. 1-seeded Philadelphia Flyers begin their Second-Round series on Monday night at 7 p.m. ET at Scotiabank Arena.

It's the first postseason meeting for the two clubs in 33 years. The Islanders advanced to the Second Round with a 4-1 series victory over the Washington Capitals, while the Flyers defeated the Montreal Canadiens in six games to move on.

The matchup should be relatively even as both teams play a structured style of play, rely on roster depth rather than star power for contributions and consist of a balance between seasoned veterans and budding young players.

While the Islanders swept the season series 3-0-0 against the Flyers, their last meeting was nearly seven months ago. The postseason has presented a fresh start and both teams have taken advantage.

Through nine games to-date, both teams have posted a 7-2 record and in their most recent series, both teams have received scoring contributions from 10 different skaters. Their successes have largely been attributed to how well each respective team has bought in to their respective identities and styles of play.

"The way we play, it's a team game," Andy Greene said of the Isles playing to their identity. "It's up and down the lineup. It doesn't matter if you're not playing Game 1 [and] Game 2 you come in and get your first chance of the series. You just step in. You do fill your role and you do your job. It's a team. We're not carried by one or two guys here or there whether it's forwards or D or relying on a goalie. It's a complete team effort. You look back on teams that go on runs, that's what you see right? It's the amount of depth. It's a team effort." 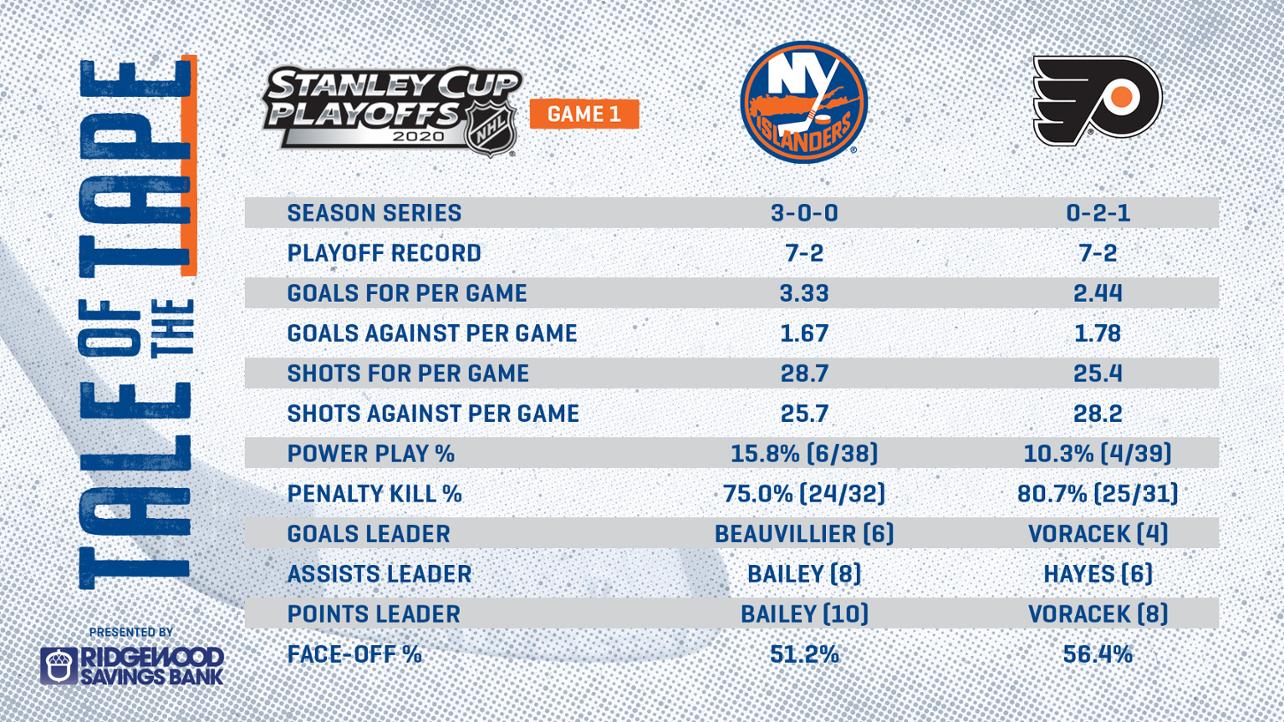 While it's a relatively even matchup for the two Metropolitan Division foes, there are a few areas that are more skewed than others. For the Flyers, they dominated the faceoff circle during the regular season and have carried that success over into the postseason.

Of teams who remain in the playoffs, Philadelphia is ranked first in the league with their 56.4 faceoff-win percentage. The Flyers top faceoff specialists ranked accordingly are; Sean Couturier 59.3%, Claude Giroux 58.9%, Nate Thompson 60.9% and Kevin Hayes 48%.

Where the Islanders have had an abundance of success is in their five-on-five play. They've allowed a league-low of six goals through their nine games. Philadelphia is not far too off having relinquished eight goals over the same span.

Compared to the regular season, where the Isles power play received a league low of opportunities on the man advantage with 168, the Isles have been on the power play for the third-most in the postseason at 38 accounts. While the Isles have converted just six times on the man advantage for a power-play percentage of 15.8%, three of those conversions have been game-winning goals, including two from Beauvillier.

The Isles PK has been mediocre, but were tested against two of the top power play corps in Florida and Washington. Throughout the postseason, the Isles have allowed eight power-play goals against - which is tied with Vancouver for the most of active teams - and earned a kill rate of 75.%. The Islanders penalty kill has scored one shorthanded goal, which unfolded to be the game-winner in Game 1 against the Caps.

"The penalty kill has gotten more and more confident as we've gone along," Trotz said. "We've had two really good power play teams that have a lot of weapons and had a lot of success on the power play. The penalty kill and the power play, for me, have scored timely goals. We haven't been stats wise in the top, but we've scored timely power play goals and had those timely kills. Those are almost as important as the numbers. When they happen and when they get it done. They've done a good job."

Philadelphia's power play has a conversion percentage of 10.3% and has only scored four times during their 39 opportunities in the postseason. All four of their power-play markers were scored against Montreal.

With games 1-4 scheduled over the span of six days, neither the Islanders nor the Flyers will have much time in between game action for practices. While it's an odd circumstance to also have one assured back-to-back set, Games 2 and 3, and another back-to-back set scheduled if needed, for Games 6 and 7, both teams are just focusing on the controllable and eager to go head-to-head.

"The days are longer when you're not playing," Trotz said. "Game days; guys are competitive, they thrive for it, they love the game day feel in terms of the importance of the games, the competition that you're facing and the workload that you've got to put in. They thrive on that. The off days are longer, therefore, they just want to play. They don't want to practice right now. You can correct a couple of things in practice which is really helpful, but with our schedule based on basically four games in six nights here there's' not going to be a lot of practice until after Game 5."

After not dressing in Game 5 against the Capitals due to an undisclosed injury that was sustained in Game 4, Cal Clutterbuck was the only question mark for the Isles heading into their series against the Flyers. Clutterbuck has been a full-participant at practice for two-straight days and Trotz noted that he doesn't "foresee" any issues with personnel availability.

For the Islanders, Anthony Beauvillier has been dominant in the postseason with six goals (three game-winners) and nine points through nine games, while Josh Bailey is the team leader with eight assists and 10 points.

For the Flyers, Jakub Voracek has been a steady force with a team-high of eight points and four goals (one game-winner) through eight games. Kevin Hayes is not far behind with his seven points and team-best of six assists.